After racing on Sunday at the Whitewater Center, and with Monday being a holiday, I decided that a long training run was in order. To make things a bit more interesting, I wanted to explore some new trails. 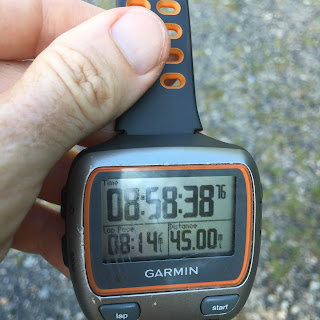 I made plans to run this loop at least twice and possibly three times if my legs felt up to it. I would use the visitor center as my base of operations since it was only quarter mile off the trail. However, when I arrived, I found the visitor gates locked so I back tracked to the Lake Crawford camp grounds, and trail head located within it. This trail head is roughly 1 mile from the main tail loop. Parking is couple of dollars, and I guessing is in the honor system. I left my $2 and hung the little marker from the front mirror. Either I did it right or there was no one around to ticket me.

The extra miles out and back from the camp didn't factor in my decision to launch my runs from it. A few extra miles don't really manner much after 30+ miles.

The trail head isn't well marked from the parking lot, but they have plenty of maps positioned around the area. Between the maps, and the signs, I was able to meander my way to the hiking trail.

I am not sure why but I decided on tackling the trail in the clockwise fashion. In hindsight, this was a good decision.

So one of the things, I never realized is that there are actually two state parks here. One is Military and one is not.

This lower section resides inside of the regular state park. The terrain is not difficult. There were lots of rolling hills and creek crossings. Some creeks I could skip over. On a few, I had to wade through the water. One of things that disappointed me about this section of the trail is the lack of maintenance on it. In some sections, the trail was over grown, and the only way to follow it is by looking for the blue trail marking squares. There were also numerous trees across the trail. After a while, I gave up attempting to count them. It took roughly 2 hours to make it the first 7 miles.

Once I crossed over to the military side of the parks, things were different. The trails were all clear and well maintained. However, this is side a lot more hilly and there were still plenty of roots and rocks.

By the time that I finished my first loop, I had already modified my plan. Instead of making a 2nd loop of the trail, I would run up to the Ridgeline trail to the the Turnback Trail in Crowder's Mt State Park. Rough guess, this would be about 18+ miles round trip. This section also had the most difficult climbing section, and to make manners worse, I would be making this run during the hottest part of the day. I drank the last of my water vest's 3 liters of water with 3 miles left.

At this point, my legs were super fatigued, and I had already fallen once. I considered quitting but I wanted a long run in prep for 50 miles, and I wasn't going to leave without.

While I was running my first loop, I remembered reading about the trail up to the top of Brown Mt which is about 1045 ft. Some quick math told me this was roughly about 10 miles round trip from the camp ground. I focused on keeping a slow but steady pace. First, I made the 2+ miles run back to the visitor center, and then the 2+ miles run out to the top of Brown Mt. This section has several nasty smaller climbs which I hadn't noticed during my 1st loop, but after 30+ miles, I was feeling everything a bit more. The climb up to the top of Brown Mt is a bit tricky. I made this climb up to what I thought was the top, only to realize, there was second decent which was followed by another climb. I just “willed” my legs to the top. Knowing I would finally be headed back and a step closer to being finished, I found strength in this knowledge. This gave me the extra push that I needed. I stumbled over a few more roots and rocks along the way but no more falls. When my Garmin finally clicked over to 45 miles, I was about ½ mile from car. Perfect timing, I needed to walk it off. My legs were so stiff and sore and even standing hurt.

This 45 miles of running took me about 8 hours and 58 minutes. Maybe it is remarkable or maybe not, but I drank over 10 liters of water yesterday, and I drank even more later.

This was my longest run ever, but more importantly, I walked away with the added confidence that 50 is with in my reach now.

Posted by Cool Down Runner at 3:59 PM