As a late week call, I put the Bunny Run 5k in Concord NC on my race calendar. Just two weeks removed from my goal race, I felt like I needed to get back on the roads again and put some racing under my belt.


The Bunny Run 5k is pretty late start for April. In the case of this April, it was. Race time temperature had to be pushing mid 70s by the time we rolled off the starting line.


Since the Bunny Run and the Street Light 5k share the same course, I was well aware of what lay in store for me. Mile one is super fast with a long downhill section. Mile two is relatively flat. And, mile three is – well mile three is pretty much all uphill with some nasty switchback thrown just to make our lives more interesting or possibly more miserable.


The starting line is packed with kids and adults.


With a quick countdown, we were sent on our way.


Running a 5k feels fast and different. My legs hate the need to turn over so much faster. Watching everyone else, they bound along effortlessly heading to the greenway entrance. What looks effortlessly for them doesn’t feel the same way for me.


Switching from the road to the greenway the course levels out. Each of those young runners now feels the true weight of running. Funny how life is equalizes us all.


My patience’s during the opening mile pays off.  Shortly after the mile, I match strides with the race leader. At the turn around, I gain a slight advantage but he roars back so we can run side by side. We switch back and forth wanting to take the lead but the outgoing racers force us to return to a single file running order. We cross under the road and see the 2 mile point just ahead. My pace carries me in to the lead. Passing the two mile mark, I grab a cup of water and dump it over my head. The cold water feels awesome and revives me from the sluggishness of the heat that I am enduring.


Now comes the hard part of climbing back up to downtown Concord. Not as much as seeing but feeling I know he drops off the pace. The terrain steepens – slowly at first but growing more and more every 100 yards.


Reaching the switchbacks my legs feel the strain of the hills but with only two options – push those thoughts aside or slow down, I opt for the former.


Topping last switchback leaves me with weary legs but one more hill still looms ahead. This last hill hurts badly.


Now, I am free to run to the finish.


Three more corners are in the books. I dig it all the way to the finish.


The Concord Park and Rec Department deserve a big “pat” on the back for job well done. They consistently organize well run races at a reasonable cost. My race day registration was $20, and I got a shirt to boot. The course was well marked and had plenty of course monitors. This included a police presence and blocked off roads.


Races everywhere could take a lesson from these guys. Could well be the reason they always have a large turnout for their races. Kudos to them on their efforts.


Sorry, I am little late in getting this one published. Work has been super busy lately, and this has caused my 2nd job/hobby running to get pushed in to the background. 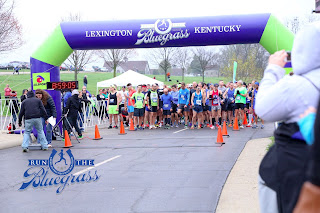 Anyway, let’s move on to the talking about the race.


On Friday, I drove up to Lexington, KY for a couple of reasons. The primary one was to visit with my daughter who attends UK. Family time is always important to me, and seeing a friendly face always helps. Besides, she doesn’t mind that I take her and friends out to dinner either.


Then my secondary reason was running the Bluegrass Half Marathon which starts and finishes Keeneland Horse Race Park. Friday evening, I went by to check out the Expo and pick up my bib number. Surprisingly, they have a rather nice Expo. Way more vendors than I expected. Also good was the opportunity to check the race start and find a good place to park for race morning.


In my preparation for the race, I spent quite some time reading about the race. When I am unfamiliar with a race course, reading several people’s reviews give me a lot insight to what the course is really like. Based on my experience, runners will describe a course as it pertains to the strengths. So if they are hill runners, they tend to play down the hills. If they are flat landers, the course is pretty much considered by Everest standards. Most reviews said this was Everest type of course. 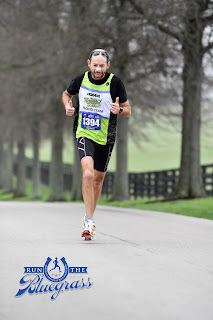 Race morning arrived with a drizzling rain, gusting wind, and a 40 degree temperate. With the wind chill, my body told me it must be in the 30s. My arms and hands were shaking at the start.


But before we can start, they play the Star Spangle Banner. Okay, I am up for this one. Then, they play “My Old Kentucky Home”. Alright, I am cold, and I am from North Carolina, let’s get this show on the road.


Within a quarter mile of the start, the course kicks up into a monster hill, and my legs have nothing for it. I’d been sick up until Thursday so may be this took something out of me. Or possibly, it was the 6 and half drive. Or maybe, I just wasn’t ready for the hills. Whatever it was; I was struggling.


And, this course has a lot of hills. Over the 13.1 miles, there are approximate 43 hills. Some hills were short but most were a long and steep climb. Still others are rollers. They busted your lungs going up, and then, beat the crap out of your quads going down.


For first 5 miles, I tucked in to a small group of about 5 runners. The wind was stinging at times, and pushed back with each step forward.


By 6 miles, they were putting a gap on me. I didn’t have anything in the tank. My legs felt totally dead.


Between miles 6 and 8 the hills were beating me up. At 9 miles, my climbing was reduced to the lowest gear above walking.


We merged with the 7 miler around 9.5, and this helped. They yelled in encouragement as I ran past. I needed it.


Pretty much the only flat on the course was the last tenth into the finish.


The Hickory Half Marathon in June is tough race but mainly because it hilly and hot. The Badin ½ Marathon in September has tough climb to the top of Morrow Mt. but still neither of these courses can hold a candle to this Bluegrass Half Marathon. I can vouch for all 43 hills on the course and “but” kicking that it gave me.


My award for the race was 6’in bourbon barrel. I have to say this was rather nice and unique race award.


My overall assessment for the race – they did a nice job. The course while tough was well marked with plenty of course monitors and water stops. A nice little spread of food and beer were provided after the race. The Expo was up and running on Thursday and Friday as well as on Saturday before and after the race. Overall awards were given on the stage while the age group awards could be picked up at a side tent. The race shirt was a thin hoodie.


So Two Thumbs up.


Posted by Cool Down Runner at 8:13 PM No comments: