A little dirt makes for a better run

So this morning, I checked the Whitewater Center website, and to my surprise, I saw that the trails were open.

Ok, well, I thought some rain rolled through last night but may be not as much as I thought. When I went past the guard shack, the green flag was waving. This confirmed what I saw on the website.

I laced up my new trail shoes and headed off on the Figure 8 trail and then the Thread trail. The trails were definitely wet and slippy. By 2 miles in my new shoes were covered in mud so were my legs. Normally, I would have done a road run, but since this was President day, and floating holiday for my company, I had the time and the opportunity to hit the trails. A few of the hill climbs were a bit tricky. I could not churn straight up the hill. I had to do this side to side thing to make it to the top. Otherwise, my run was pretty much uneventful.

Of course, I always enjoy any run that turns muddy. This reminds of the days when my mother would tell me to stop splashing through every mud puddles. Now, I go through every one of them making an even bigger splash. However, I still get this eerie feeling that she is looking down on me and frowning – may be just a little bit. LOL.

Anyway, as I was driving out by the guard shack, I noticed that they had switched up the flags. Apparently, in hour or so that I was out running, the trail were determined to be a bit to wet. Luckily, I was finished so no way to undue my run.

You can never get too much mud on you, 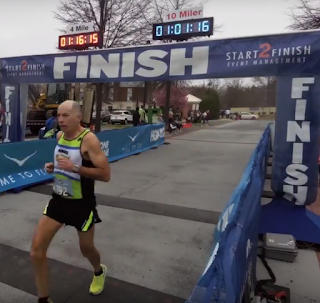 At some point in the past, someone has told me that what goes up, must come down. I guess the reverse is true as well.

In the Charlotte 10 miler we go down, down, and, down, and down some more in the first couple of miles. Everyone looks strong running downhill.

Then, we tackle a few hills thrown between miles 3 and 5, but they are not bad. They help break up running on the greenway.

Around 8 miles, we exit the greenway for the last couple of miles on the road which took us through a side neighborhood. Here's where the real climbing comes into play. I guess what makes the final hill such a challenge is that it climbs so much in just a short period of distance.

Up to this point, I thought I was managing my race fairly week. Dan, Ryan, and few others made up our little group leaving the start. Ryan looked strong heading into the greenway but then he drifted back. Meanwhile I was working hard to stay with our group. Warming up, I just felt tired today. My legs didn't have any pop in them. This partly explains why they were opening some distance on me, and the fact they were in better shape than me. Through miles 3 to 5, I felt like I was struggling. The hills were kicking my “but”.

I went through 5 miles in 30:30, but I wasn't feeling good about it. However, keeping me motiviated was catching the two guys in front of me. The first guy, I caught around 6 miler. The second guy, I caught him about 8 miles. We ran together until we hit the hill. Then, he says to me: "come on”. I wish. I felt like I was crawling up the hill. My quads were burning. I just wanted to get to the top and more so the finish.

He opened a small gap on me during the final climb. I thought I could close it back in the last mile, but it never happened. I watched his back as he stayed just out my reach all the way to the finish.

I really felt tired the entire race and never felt like I had any punch in my legs. They simply refused to turn over any faster. This is one of the cases where the mind was willing but the body was not.

Overall, I was still pleased with my effort. I ran 61:14 which is about 20 second faster than I ran this race 2 years ago. This put me 1st in my age.

Mostly, I was really happy that the rain held off. The greenway boardwalks get slippery when they are wet. Makes it very easy for a runner to down.

After two straight weekends of racing, I am looking forward to some downtime from racing next weekend. February is half over, and this brings a lot of good racing in March. I need to get my leg mojo back.

See you on the roads,

Walked outside yesterday, and wondered where all of the cold weather went. Suddenly, my body is fighting to compensate for the sudden change in temperatures. Sweat poured down the sides of my face.

As much as I am ready to pack away my cold weather running gear, this likely isn’t the right time yet. Give it until mid March and maybe even the first of April. The trees will be in full bloom. The time will be right to pack way my winter gloves and hats for the roughly the next 6 months.

That is until a stiff cool fall breeze comes blowing across Charlotte, but let’s not rush it just yet.

Although, this reminds of something that a buddy once said to me. He preferred it cold. He said that as it gets colder that he could always put on another layer of clothes but when it is hot, you can only take off so much.

Every time that I am running down the street and sweat drops off my cap, I smile because I remember back to that conversation with him.

So go grab some miles. It is awesome outside. Sweating is a good thing. LOL 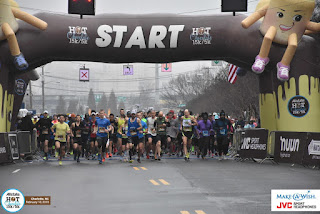 Had some fun times at the Charlotte Hot Chocolate 15k this morning. Got a chance to catch up with Megan. Hadn't seen her in nearly year. Had the opportunity to mix it up again with Mark this morning. The last time that we mixed it up was at the Charlotte Turkey Trot 8k on Thanksgiving several years ago. He was wearing a Turkey costume, and it took everything that I had on that day to stay in front of him. I was expecting him to be off running with the leaders.

The weatherman was calling for rain today, but we got off lucky. Most of the race we faced nothing more than a slight drizzle.

With the 5k runners heading off at 7:45 AM, we made our way to starting line for an 8:05 start. Mark and Megan were lined up next to me. Chaz, who was pacing the 7 minute milers, was just behind us.

Everyone stepped up to the line, and we were off and running. Almost immediately, we all went single file. Seemed that Mark and I were running similar paces. We passed a couple of guys in the first 3 miles, but by then, the lead runners were out of sight. We were pretty much pushed each other, or in all in honesty, Mark was pushing me the rest of the race. However, from the look on this face, he didn't seem to be working as hard as I was.

And, good lord, was the course full of rolling hills. I cannot explain it why but it always seems like the uphills go on forever while the downhills are way too short. We passed through 4 miles, and then 5 miles, and then 6 miles. These Hot Chocolate guys had their stuff together. Cones marked the course so if you got lost, it was because you were not paying attention. Something I nearly did at one turn. They had clocks at every mile. If I remember correctly, all running except one. Then, there was aid stations. Plenty of the water, Nunn, and Chocolate if you wanted it were being offered, and they had plenty of volunteers staffing these aid stations. 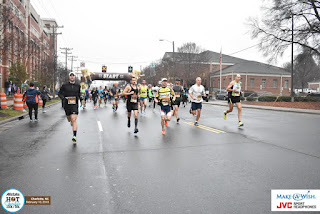 For most of the race, I had a step or two on Mark. Occasionally, he would come up by side me on a hill, but once we crossed it, I got my step back. That is until we hit the final climb on Randolph Road. Mark came up by side me, and then he just shifted into another gear. My legs were struggling. I couldn't maintain his pace. The more we climbed, the more ground that he put on me. We turned off the Randolph Rd, and for a moment, the ground losing stabilized. Then, we started up Laurel. Laurel isn't necessary steep but rather just a slight steady climb. However, at nearly 9 miles, my legs thought they were climbing Everest. Not helping my confidence, Mark was growing smaller with each step that I took. And, he wasn't getting smaller in my rear view mirror, but out my windshield. He was definitely pulling away. The whole time, I felt like I was slowing down. I hit the 9 mile mark around 56:20. I sucked it up and pushed my way to the finish. I clocked a time of 58:28.

My time was slower than my Novant Health 15k last fall, but still I was happy with it. This coarse in my opinion is actually tougher than the the Novant race. 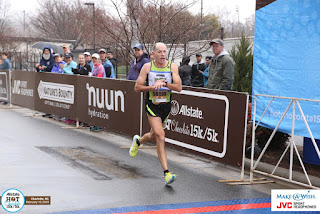 I finished 7th overall, and some 20 second or so behind Mark. This placed me first in my age group.

Post race, I need to give the Hot Chocolate guys props for a “sweet” looking medal. Also, the post race mugs were more like a huge bowl. It came with snacks and a cup of hot chocolate. I just wish we could get seconds, thirds, and forths.

One last note on my closing miles, while mentally, I thought that I was slowing down. Looking at my splits now, I pulled my over pace for the race down by 2 seconds per mile over the last 5k. In reality, my only problem was not slowing down but Mark pulled his down by 5 seconds. Guess, I just need to work harder so next time, I give myself a better opportunity to stay with him.