Several weeks ago, Jeff, one of my business park running buddies, asked if I was coming to their Valentine’s Race in Denver, NC. I had run it a few years ago, but with my typical spring marathon plans, it hadn’t worked out as often as I would like to make a return trip. However, with no spring marathon on my training schedule this year, I signed up.


And with a 9:30 start time, I can sleep late, and still easily make the start.


To shed a little light on this race, they always hold it the weekend after Valentine’s Day. Don’t ask me why, I don’t know, and I have never asked why. Anyway, they should really call this race Cupid’s Revenge because their course is one of the hilliest 5ks around. Literally, the only flat section on the entire course comes in the first ½ mile which runs along the western shoreline of Lake Norman. The rest of the course, I was either going uphill or going down. The up hills were steep, and I often felt like the downhills were even steeper.  Needless to say, this course challenges a runner’s lactic acid threshold and max heart rate. I vouch both.


Throughout my many years of running, I find small town races are some of the best. They can also be some of the most humorists as well. For example, as we gather for the start, the race director proceeds to tell us the turn by turn directions for the entire course.  And, yes, there are a lot of turns on this course. When they do this, it always worries me. First, does he assume everyone knows these streets by heart or I should I have brought a pencil and paper to write them down.  Apparently, getting to finish is really a test of my ability to follow verbal directions. Second, more worrisome is the course not well marked or will there be no volunteers directing us. Running off course in a 5k isn’t so bad. However, I run off course in a marathon. Now that’s bad.


Next is picture taking. Now, I understand the need for pictures. Our Winter Classic is a growing race in January, and we like to use pictures from our race in our advertising for the next year. So, yes, race pictures are important, but how many do you really need. I lost count on how many they took yesterday. But it was more than 5, and slightly less than infinity.


Of course, their playing of the Star Spangle Banner had to be special. Ok, the playing of the Star Spangle Banner is always special, but they added something. He started with one horn and then switch to another one during the second half of the song. I am not a music expert so which horns that he used is beyond my musical knowledge but it was still pretty cool how he switch without missing beat. I give him major kudos for his effort here.


Well, start time was finally upon us, and as one final part of our race directions, we were all asked to run PRs. Apparently, the race was already 2 minutes late so they need us to run faster so they could get back on time. Now, from my perspective, if they wanted me to run a PR, I am going to need more lead time than race morning. I am going to need to go back in time about 25 years to run a PR.


So with a NASCAR style start we were finally off. It needs to be noted that we used the American flag waving rather than a NASCAR green flag to start the race. I am not even sure why I mentally noted this but I did.


As happens in many of these smaller races, if you were born in the year 2000 or later, you have a license to go out fast. I felt like I was taking a bunch of school kids to the play ground with them rushing by me on both sides. Yes, they were all school kids so maybe there was a play ground along the course that I missed in the course directions given earlier.  Of course, about ¾ of mile into the race, the rubber meets the road or should I say their lactic acid loaded legs and their hearts thumping along at close 200 BPM were telling their inexperienced brains to slow down.


By the mile, I had steadily moved up to 4th place. Before a mile and half, I had moved in to 3rd place. That’s as far as I would climb. Now, it was my turn for my legs and heart turn to refuse to go any faster. My tiny brain was willing but like I said my legs and heart were steadfast in their refusal to help my cause.


We rocketed down one hill only to be met with a steep uphill. Back and forth, I went.


That darn kid that ran right in front of me was like a carrot on a stick. He was just close enough for me to think that I might catch him yet just far enough out of my reach to make it happen. Ugh, if you are racer then you know what I am saying and how it feels.


Finally, my Hoka/Charlotte Running Company Jersey flashed across the finish line. My 18:26 time was better than I expected for the course or for being 3rd overall and 1st in my age group.


Major kudos goes out to all of the Valentine's 5k Race Crew and their volunteers. They made this a memoriable event for me which is one of reasons why I will be back.


Posted by Cool Down Runner at 3:13 PM No comments:

Run for the Cause 10k

Nearly two months have passed since I last strapped on my racing flats, and I went racing. Why am I starting my post this way? Well, I am getting the itch to put some racing miles in my training plan. This seem like the ideal weekend to do it. 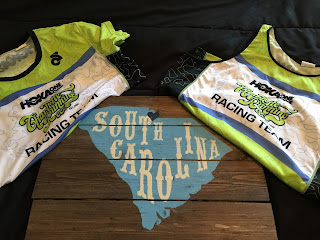 On top of it, for the first time, in the several years, I laid out a formula training plan and with a specific goal of a ½ marathon as the end all target race. To set all this up, I needed some races to check my fitness and for that matter, some tune races to shake the dust off.


This started me looking for a nice little 10k race. Something where I had put in a solid effort but it wasn’t going to leave me recovering for several days.


A few internet searches later, I was registered for the “Run for the Cause 10k” in Fort Mill or rather Baxter Village to be more specific.


From what I gathered from the website, the course both 5k and 10k were pretty much rolling hill course. All the better, I like a challenge.


And of course, the weather was not really cooperating. Race morning at 9 am was bone chilling 25 degrees with a stiff wind blowing.


This is really too cold for racing but what’s a runner to do but “suck it up”.


The race strung out pretty fast. A couple of runners jumped out real fast, and through the mile, I was barely maintaining the gap between us.


Unfortunately, or fortunately, depending on your perspective, I was going to be solo for the rest of the race.


When they said the course was rolling hills, they were not kidding. There course had plenty of kick your “but” hills. There is one hill on “Gardinia”. It must be a ¼ mile long but it is steep. My legs carried me up it, but they were wasted doing it.


Then, it was up and down until we hit the local greenway, and through the tunnel.


You are going to love this. The greenway ends with this set switch backs. They are super steep before putting the runners back out on the road.


If my legs were not finished being cooked by the "Gardinia" hill, they certainly were now.


I finished in 40:12 and won a nice South Carolina labeled plaque for my efforts.


Overall, this was nice little race. After seeing the markings on the road, I half expected to be guiding myself through the course, but they have volunteers at most of the intersections, and bikes out guiding us through it. I give them a double thumbs-up for this part.


They had tons of door prices. There were 3 different dentist giving away gift cards for their dental services. There were weekends give-aways in both Washington DC and New York City.


Sadly, I didn’t walk-away with any prizes, but I was there so I at least had a chance.


So now with this 10k in the books, I need to kick my training up another notch this week before jumping in another race.


Getting older just means I have to work smart as well as harder.